was opened by the beginning of year 2013 to serve the devotional, cultural and spiritual needs of the Hindu community in and around Central Illinois.

The temple observes all major Hindu functions throughout the year, along with daily pooja, abishekam, alankaram for the deities performed by the priest with assistance from temple volunteers on auspicious days.

Sri Maha Saraswathi Temple welcomes all devotees to experience peace and sanctity at the temple. 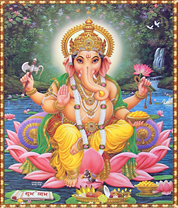 Lord Ganesha, son of Shiva and Parvati,  is worshipped as the god of education, knowledge, wisdom and wealth. Ganesha is one of the five prime Hindu deities (Brahma, Vishnu, Shiva and Durga being the other four). Ganesha head symbolizes the Atman or the soul, which is the ultimate supreme reality of human existence, and his human body signifies Maya or the earthly existence of human beings. The elephant head denotes wisdom and its trunk  represents OM. Ganesha is widely revered as the Remover of Obstacles and more generally as the Lord of Beginnings and the Lord of Obstacles, patron of arts and sciences, and the god of intellect and wisdom. He is honored at the beginning of rituals and ceremonies and invoked as the Patron of Letters during writing sessions. 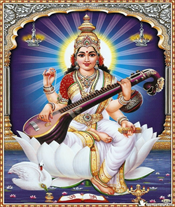 Devi Saraswati, the goddess of knowledge and arts, represents the free flow of wisdom and consciousness. She is the mother of the Vedas, and chants to her, called the Saraswathi Vandana often begin and end Vedic lessons. Saraswati is the daughter of Lord Shiva and Goddess Durga It is believed that goddess Saraswati endows human beings with the powers of speech, wisdom and learning. She has four hands representing four aspects of human personality in learning: mind, intellect, alertness and ego. She has sacred scriptures in one hand and a lotus,  the symbol of true knowledge, in another. 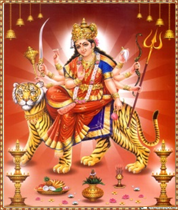 Maa Durga is the mother of the universe and believed to be the power behind the work of creation, preservation, destruction and recreation of the world. Since time immemorial she has been worshipped as the supreme power of the Supreme Being and has been mentioned in many scriptures - Yajur Veda, Vajasaneyi Samhita and Taittareya Brahman. The word "Durga" in Sanskrit means a fort, or a place which is difficult to overrun. Another meaning of "Durga" is "Durgatinashini," literally "the one who eliminates sufferings." For believers, goddess Durga protects from the evils of the world and at the same time removes their miseries. 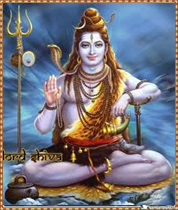 Lord Siva is the supreme being functioning as the destroyer of ego and illusion, and the material universe at the end of each cycle of creation. He is also known as Rudra and is worshipped in the form of a Linga, which represents the dissolution and unification of all forms into one undifferentiated reality. His vehicle is the bull which is the symbol of happiness and strength named Nandi. Shiva is usually worshipped in the aniconic form of Lingam. The Shiva Linga is merely a sign or mark of the presence of the Divine. Shiva is described as an omniscient yogi, who lives an ascetic life on Mount Kailash as well as a householder with wife Parvathi (also known as Mahadevi, Shakti Or Durga) and two sons, Ganesha and Balasubrahmanya. 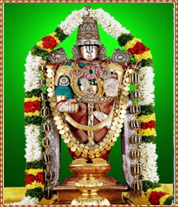 Lord Venkateswara, popularly known as Balaji, Srinivasa, Thirumaal and Venkatananda is the presiding deity of the Tirumala hills. He is one of the manifestations of Lord Vishnu, who incarnated in a previous kali-yuga at the request of sage Narada. The sage Narada requested Lord Vishnu to settle in Tirumala, to shower his eternal grace on mankind. He is portrayed carrying in his hands a conch (shanka), a discus (chakra) and a mace (gadha). He wears a crown, two earrings, a garland (mala) of flowers around his neck and a gem (kaustuba) on his chest. Goddess Lakshmi resides in his right chest.